Our Heaven is all grown up now. We’ve grown up with legends and adepts. We have gained friends and an ideology. And now, on March 19 and 20, we are going with this positive baggage in an eccentric two-day trip to celebrate the seventh anniversary of your favorite club!
Imagine a sunset in a small Thai village. An ordinary girl who thinks big, staring off into the distance in the direction of the sun in dreams of conquering the world with music…
Nakadia is the headliner of Heaven Seven Birthday! She has carried her irrepressible energy since childhood, teleporting her to Europe in the mid-2000s, where she was introduced to techno. A tumultuous journey began. After pioneering the music underground on her native island of Samui, she entered the world stage in a very short time and has already toured over 70 countries.
In addition to taking part in some of the world’s most respected festivals – Tomorrowland and Australia’s biggest festival Rainbow Serpent Nakadia is a frequent guest at parties in Ibiza. That’s saying a lot and there’s no doubt who the cherry on our holiday music cake by Heaven family is.
The Thai headliner will be accompanied by time-tested artists from our sound system – 8KAYS, Key M, Vlad Yaki, Yadzz, Xenia, Cherry, R.A.N., Wacky J, Kinree, Varya and Evka. Sky-huggers, are you ready? 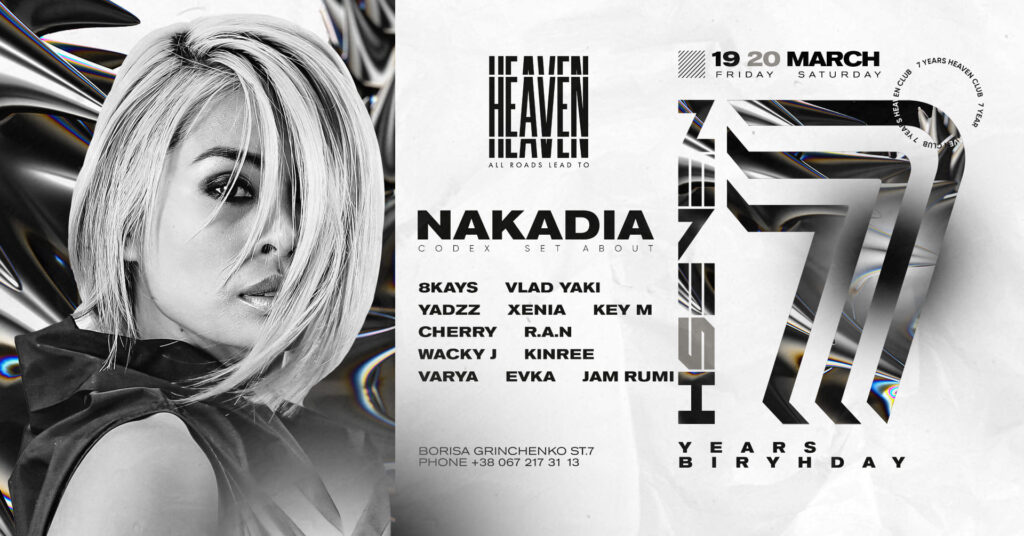